Using a monitor mount requires that both, the mount and the screen, have the same VESA standard. This is the only way the TV can be attached to a swivel TV wall mount, for example. For LG models, universal VESA adapter plates are available, which extend or change the VESA mount. There are also VESA adapters available for LG OLED TV models which do not have standardized VESA mounting holes.

The universal VESA adapter plates extend, for example, the VESA recording of the LG monitors from 200x200, 300x200 or 400x200 mm to the VESA recording of 400x300mm. With the adapter plate the LG TV can now be attached to any monitor mount with a VESA standard of 400x300. This gives you a wide selection of possible wall mounts, desk mounts or similar. For LG OLED televisions which do not have a VESA standard, a VESA adapter can help. The adapter is simply attached to the LG and already a VESA standard of, for example, 300x300 is available. 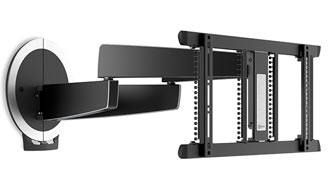 LG VESA adapters are available in one of the listed online shops. For VESA adapters the online shop www.monitorhalterung.de is particularly noteworthy, because it offers the widest variety of products. Is your LG model missing or do you need a special solution? MonLines manufactures individual VESA adapter, adapter plates and monitor mounts.