Computer monitors and smaller televisions usually have the VESA MIS-D standard. With the VESA MIS-D standard, the mounting holes on the back of the monitor or TV have a horizontal and vertical distance of 75 or 100 mm to each other, which corresponds to a VESA standard of 75x75 or 100x100. Due to the decreasing weight of the newer monitors, screens with a screen diagonal larger than 58,3 cm now also have the VESA MIS D standard. It's best to measure your VESA standard yourself! 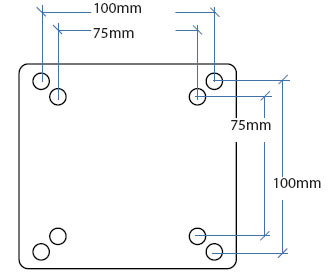